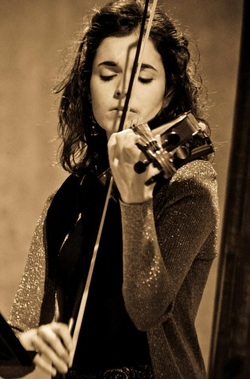 The Navarrese violinist Marta Ramírez started studying music in her hometown Pamplona with the teachers Sagrario Iribarren, Teresa Echeverría and Olatz Uribe-Etxebarría. In 2010 she moved to London to continue her training in Trinity Laban Conservatoire of Music and Dance with the violinist Clare Thompson and the Baroque violinist Walter Reiter, given that Marta has a great interest in the historical interpretation of Baroque music.
She has received master classes from the violinists Joaquín Torre and Lutsia Ibragimova. Marta performed as a soloist with the Orquesta Sinfónica del Conservatorio Pablo Sarasate, interpreting works by J.S. Bach and Pablo Sarasate. She also has an interest in Contemporary music and improvisation, and is part of the Soundpainting Improvisation Orchestra directed by the composer Diego Ghymers. Marta has recently worked with the artist Roswitha Gerlitz in the creation of the contemporary opera “One of these days you…”
Chamber music is one of Marta’s great passions. In 2010 she formed the Alma Duo together with the Navarrese-British harpist Alicia Griffiths Turrillas. She has also formed a duo with the Italian pianist Stefano Ruiz de Ballesteros (2012), with whom she offers recitals both in Italy and in Spain.
In the Early Music field, Marta has participated in various early music projects directed by Walter Reiter, Adrian Butterfield, David Miller, Rachel Podger and Nicholas Kraemmer. She is also a member of Battaglia Baroque ensemble. Last summer Marta had the opportunity to attend Brecon Baroque summer course where she worked with Rachel Podger and Alison McGillivray. Marta won the 2012 Early Music Competition held at Trinity Laban Conservatoire of Music and Dance. As a result, she has had the opportunity to perform in the 2012 Greenwich International Early Music Festival and in Mac Laren Hall.
Her interest in education led Marta to combine her violin studies with teaching music and violin throughout the past years. She is involved in the Atrilia music association where she teaches on summer courses. Marta has also taken part in a number of educational projects that include both performances and workshops.
Marta has been passionate for classical and contemporary dance from an early age, which led her to combine her music studies with a comprehensive classical and contemporary dance training. For the past few years, she belonged to the experimental dance company Kon-moción led by the American dancer and choreographer Becky Siegel, with whom she has performed in Navarre (Spain) and Paderborn (Germany). She has also collaborated as a dancer with the Indian music group Nadanta. Marta now continues to explore the world of dance with Gabrielle Roth’s Five Rhythms practice. 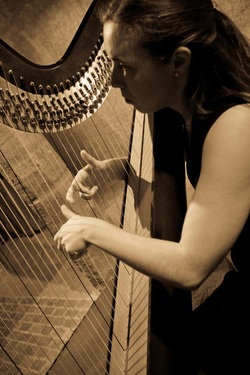 Alicia Griffiths Turrillas was born in Pamplona into a musical family – her grandfather, Manuel Turrillas was a great composer of popular Navarrese folk music. She started to play classical guitar at the age of 7, and harp at the age of 13. Alicia completed her school and conservatoire studies in her home city and moved to Wales in 2006 to study harp in the Royal Welsh College of Music and Drama, where she obtained her Bachelor degree, with financial support from the Government of Navarra.
Alicia has given solo recitals throughout the UK, Spain and Singapore. These performances have included Debussy’s Danse Sacrée et Profane for harp and strings and Mozart’s Concerto for Flute and Harp in C (KV 299). Alicia performs regularly with the Orquesta Sinfónica de Navarra, London Mahler Orchestra, Bloomsbury Chamber Orchestra, Whitehall Orchestra, Orquesta Filarmónica de Gran Canaria, Basque Country Youth Orchestra and Youth Orchestra of Norway among others. However, it is chamber music that she is most passionate about, and enjoys working with various ensembles: with violin, with voice, and with flute and viola to name a few.
Alicia has recently finished her Masters studies with Gabriella Dall’Olio, and with Frances Kelly on Baroque harp at Trinity Laban Conservatoire of Music and Dance in London, where she also teaches harp and chamber music in the Junior Department. In 2011 she was awarded the John Marson Prize for Harp Studies which led to her debut recital at St.Martin in the Fields.